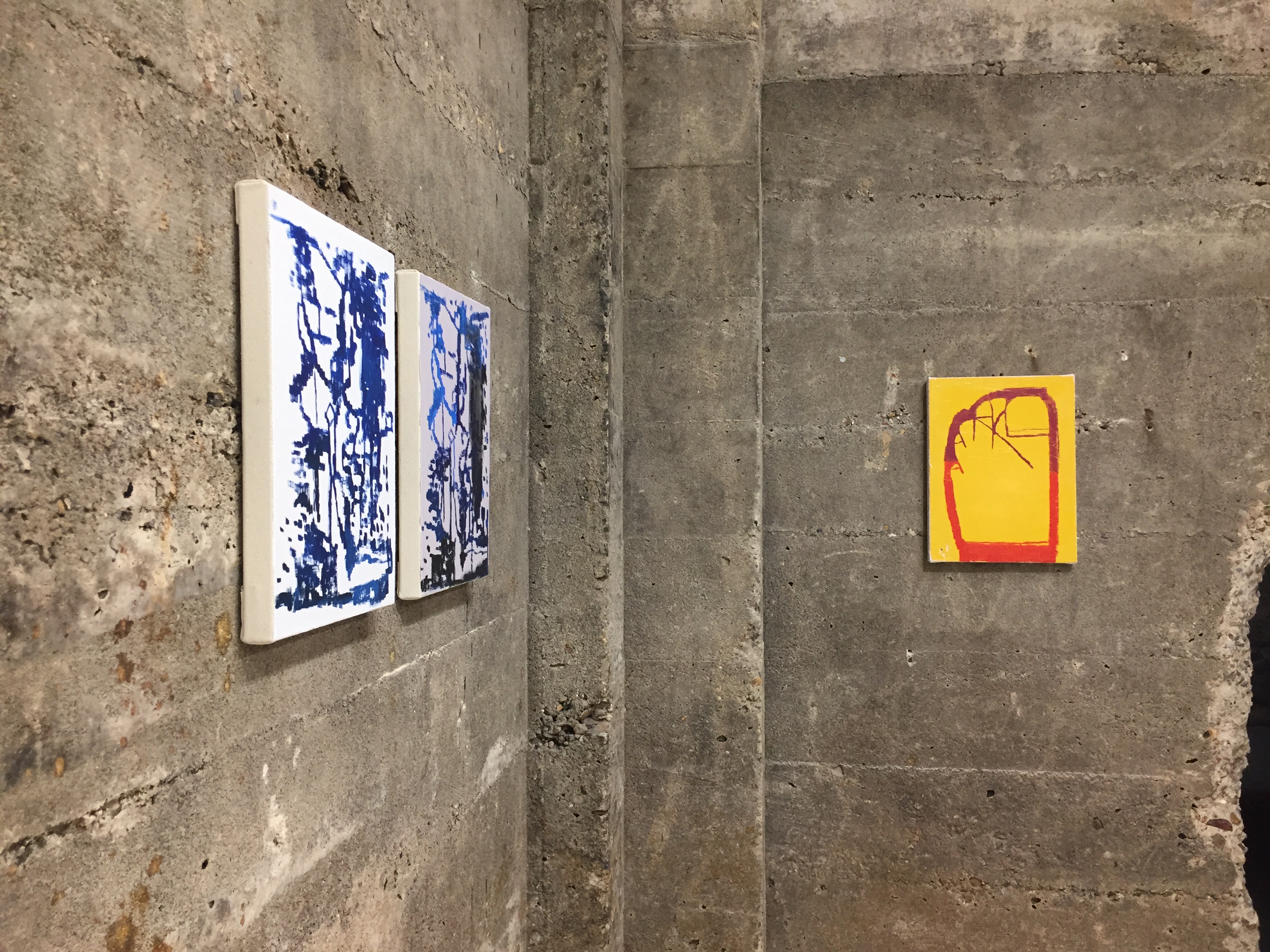 Gleaming metal ductwork, glossy white floors and ceilings, dingy cement walls, perfectly appointed lighting — Memphis’s Tops Gallery is a revelation. Screen Door, curated by Hunter Braithwaite, presents four painters: Anne Craven, EJ Hauser, Dana Frankfort, and Margeaux Ogden. Screen doors are pragmatic solutions–keeping out unwanted pests but allowing a breeze to pass. They are nostalgic for a lot of us with associative connections to home and the South: a land, a season, a breeze, an era, a housewife[1]. One can think of painting as similarly defined by both its expansive possibilities and constraints.

Installed in the entry is Dana Frankfort’s head-sized painting, The. Modestly-scaled, the chalky cobalt surface is dolloped with a white calligraphic loop over half of the composition. A deeper, darker arc lives between the white loop and over the aforementioned blue, like a cast shadow, neither figure nor ground. Title (The) and surface (gesture, color) are perfect lovers, making a home in a world that is both object and subject, closure and opening.

When I first saw Frankfort’s painting, Written Word, I read the scrawled opaque word fragment as AMEN, and A MAN. Any mental space between place and text collapsed, as the Lorraine Motel is a block or two away from Tops Gallery, giving me I AM A MAN (Memphis Sanitation Workers Strike, 1968). Frankfort’s palette employed for Written Word creates a high-toned world revealing itself in break-your-heart, achingly variegated, iridescent scumbles and bumps. Shimmering particles are excavated in multiple sanded layers.

A former coal chute at the perimeter of the main gallery’s ceiling allows for a head-sized crescent of sunlight to fall next to Frankfort’s painting, Of. This happenstance allows for a poetic dialogue with works by Ann Craven, whose interests include seriality and time, often making paintings of moons at various state of waxing and waning. Underscoring temporality and color, Craven’s quadriptych, Bird With Pussy Willows, Hit Song on Lavender and Black, is a careful but unprecious furthering of her project. Installed with panel edges touching, like a version of a Japanese screen, brushstrokes forming color bands in the same palette interrupt two blurrily-painted images of birds. Craven’s piece most directly references a lens-based possibility to painting. 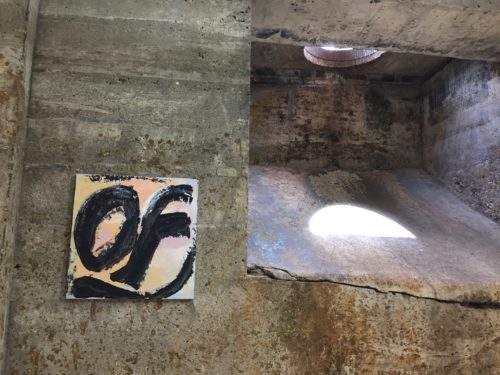 The anteroom gallery seems to reinforce a screen door’s use, framing a view through impediment — stepping around nooks and walking through mild darkness to approach an illuminated wall. Margaux Ogden gathers patched stains of color, pencil marks and ribbons of flat brushwork in palette keyed for the beach. Three Wrestlers requires a closer inspection — or maybe even a slight adjustment of vision. Scribbled loops allow one’s eye to make rounded turns around the surface of the painting. Tinted triangular shapes and lines around the painting’s perimeter divert compositional flow, like sticks in a river dam. Pale pink flourishes, subtle Naples yellow swoops and worm-like lines the color of linen are deliberate, like carefully-appointed tan lines.

EJ Hauser’s marks are sketchy, jerky answers to Ogden’s restraint. If Ogden is blocking our access to any referent, Hauser opens wide the door to reference with cartoon-like figures and chunky feet. Erratic paint strokes read like choppy contrails, like in the Wizard of Oz when the witch skywrites “Surrender Dorothy” on her broom. Hauser’s mark (self-described as having a “mosaic-like” and “vibrating quality[2]”) is a Microsoft Paint-referenced dream, allowing for a bold, screen-sized, “gestured” moment outside of Modernism. Flat(ish) ground of color is overlaid with a continuous deliberation of tracks, generally read as creaturely (feet, figure, eyes, parts), that are not yet seated on the flat plane. Landscape/man (blue) and landscape/man (purple) are twins, or at least close cousins, and are important for the show. They allow for a stepping into current painting practices that greet references as a welcomed guest but also deny the permanent seat for a single, spatial reality.

Screens can supply unsatisfying feeds of news, headlines, gossip, happenings, weather. However, lenses can also provide a means for seeing. Screen Door is the best of painting, showing works that open up vistas and block old habits. Screen Door is flat planes of color, scribbles over texture, and funny-little-man figures. It is as intimate and as stimulating as a dinner party. Comprised of four women, gender never entered my mind related to the show and its strength. Ain’t that a woman.

Jodi Hays is a painter based in Nashville, Tennessee.